In 1937, Italian theoretical physicist Ettore Majorana published a paper, in which he made a brilliant discovery by decomposing Dirac equation into the real and imaginary parts. That is the famous equation describing the motion of a Majorana fermion whose antiparticle is itself. Over the past 81 years, the search of Majorana fermion has been one of the most attractive research topics in physics. In high-energy physics, neutrinos have been proposed as Majorana fermions, and a definite experimental evidence will be one of the biggest discoveries since the discovery of Higgs boson.

In the past twenty years, there were plenty of exciting theoretical proposals and experimental discoveries in condensed matter physics. If one can regard the elementary particles as specific excitations of the quantum ground state of the universe, then quasiparticles in a solid material obeying the same motion equation can be regarded as the duality of elementary particle in a high-order field (the space group of crystal). Searching for exotic fermion excitations in solid state has been a focused topic during the last few years. Beside those dualities of elementary particles, i.e. Dirac fermion (Na3Bi), Weyl fermion (TaAs), condensed matter physicists discovered more exotic excitations which are protected by the crystal symmetry that is higher than the symmetry of universe, i.e., hourglass fermion (KHgSb), three-component fermion (MoP). Nowadays, despite researchers have accumulated extensive knowledge on the fermionic excitations in solid state, the appearance of Majorana fermion or bound state in topological superconductors has not been settled conclusively.

A Majorana fermion is charge neutrality due to self-conjugation of Majorana operator. It inspired condensed matter physicist to compose Majorana quasiparticles in a topological superconductor, as the Bogoliubov excitation is a mixture of particle and hole components. In the early 2000s, theorists made an initial prediction, that the chiral p-wave superconductor without time-reversal symmetry can harbor Majorana excitations, both the Majorana bound states (0D) inside the half-flux vortex core and the Majorana chiral modes (1D) propagating along the edges of a superconductor. What is more interesting is that Majorana bound states obey the non-Abelian statistics. It has been proved that Majorana bound states can stay at different degenerate ground states by braiding operations. This is the building block of topological quantum qubit and a promising method realizing topological quantum computing. However, a p-wave superconductor is rare and extremely sensitive to disorders. It leads to huge difficulties in experimental realization of Majorana fermion. A breakthrough occurred in 2008 when theoretical physicist Liang Fu and Charles L. Kane from University of Pennsylvania proposed a new mechanism based on superconductivity of topological surface state induced by the proximity effect of an ordinary s-wave superconductor. They found Majorana bound state should exist inside the vortex core. This proposal eliminates the difficulties of a p-wave superconductor and creates huge enthusiasm of condensed matter community to study related routes of creating detectable Majorana fermions. Later on, several evidences on Majorana quasiparticles were published on different platforms, i.e., semiconducting nanowire based heterostructure (Delft / Copenhagen), magnetic atomic chain based heterostructure (Princeton), and topological insulator thin films based heterostructure (Shanghai Jiaotong). However, all those platforms suffer the problem of complex interface. Moreover, their ultra-low critical temperature and very small superconducting gap led to more troubles. The signals of the zero-bias peak (evidence of a Majorana bound state) were always mixed by trivial states that located very near the zero energy as well. It weakens the reliability of experimental evidences and limits potential applications in the future. If one can make a combination of band topological property, intrinsic high temperature superconductivity and strong electron correlations into a single material, the next breakthrough may occur in this field.

In 2015, an ARPES group in the Institute of Physics (IOP), led by Prof. Hong Ding, has obtained an initial evidence of a Dirac cone like surface state in a highly correlated Fe-based superconductor FeTe0.55Se0.45 (P. Zhang et al., APL 105, 172601 (2014) They then collaborated with a first-principle group in IOP, led by Profs. Zhong Fang and Xi Dai, and proved theoretically and experimentally that there is a topological nontrivial band inversion in this material upon Te substitution (Z.-J. Wang et al., Phys. Rev. B 92, 115119 (2015)). At the same time, another theoretical group in IOP, led by Prof. Jiangping Hu, found that Fe(Te,Se) monolayer film may also have the similar topological band inversion by Te substitution (X.-X. Wu et al., Phys. Rev. B 93, 115129 (2016)). This prediction was later verified by Hong Ding’s group (X. Shi et al., Sci. Bull. 62, 503 (2017)). In 2016 a theoretical group in Stanford University, led by Prof. Shoucheng Zhang, has made a theoretical prediction that a Majorana bound state (MBS) may exist inside a vortex core of FeTe0.5Se0.5 under a suitable condition. In 2017, Hong Ding’s group collaborated with Prof. Shik Shin’s group in Tokyo University, and performed ultra-high resolution ARPES experiments on FeTe0.55Se0.45, and for the first time they clearly observed a superconducting topological surface state (P. Zhang et al., Science 360, 182 (2018)). It was found the Fermi energy (EF) is comparable to the superconducting gap (Δ) of the surface state. That proved the combination mentioned above does occur in FeTe0.55Se0.45, and one would naturally expect a MBS inside a vortex core of FeTe0.55Se0.45 can be free from contamination of other trivial bound states,

Since April 2017, Prof. Hong Ding made a close collaboration with Prof. Hong-Jun Gao in IOP. They guided PhD students Dongfei Wang, Lingyuan Kong, Peng Fan, Shiyu Zhu and other students in IOP to perform measurements of vortex core of FeTe0.55Se0.45 single crystals. During the last year, they have measured many samples and carried out He-3 low temperature measurements for more than 100 times using two low-temperature STMs developed in Gao’s lab. They have successfully obtained repeatable observations of a strong zero-bias peak inside a vortex core of FeTe0.55Se0.45, regarded as a hallmark of a MBS. The experiments were benefitted very much by the excellent facilities and rich experiences of measurement in Gao’s group. Team members dedicate themselves to the experiments. In the first 6 months of the experiment, the team worked nearly 24 hours one day and 7 days one week. Some main members of the team even worked continuously more than 30 hours. Shiyu Zhu, Dongfei Wang, Peng Fan, and others even sacrificed their Chinese New Year holidays to continue the experiments. All of these make it possible to get a large amount of data in a short time.

There are several advantages in the new discovery as comparing with previous observations. They clearly observed the spatial non-split feature of a MBS with its width being nearly energy resolution limited. The MBS is robust against changing tunneling barriers, and it can be observed across a large range of magnetic fields. Comparing to theoretical models, they concluded that the MBS observed come from the quasiparticles of the superconducting topological surface state, while the temperature behavior indicates the bulk thermal quasiparticles can poison the MBS. All of those evidences lead to a conclusion that the observed MBS is largely pure and free of mixing of other trivial bound states. This is the first clear observation of a pure Majorana bound state. The relatively high temperature indicates that the Majorana bound states can be realized under the He-4 temperature. 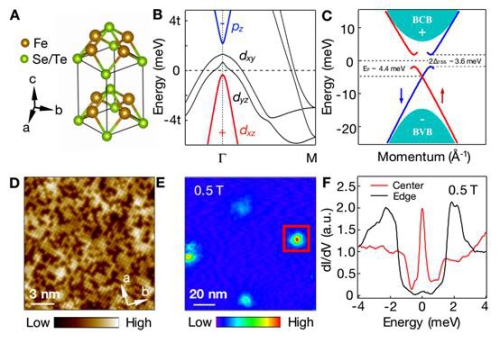 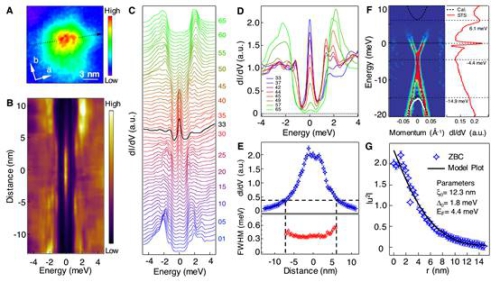 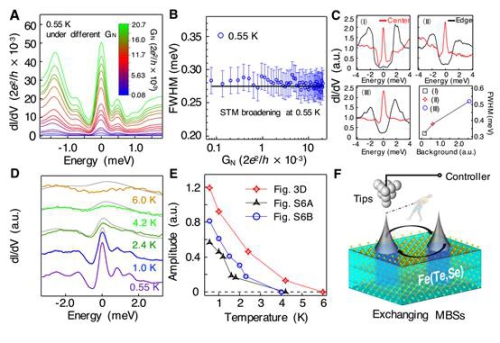