Besides these aforementioned in-operation facilities, more physics related large-scale scientific facilities and research platforms are under constructing at CAS; among them are the Jiangmen Underground Neutrino Observatory (JUNO), China Spallation Neutron Source (CSNS), Accelerator-driven subcritical system (ADS), Bei- jing High Energy Photon Source (HEPS), and the X-ray Free Electron Laser in Shanghai (XFEL), etc. The professors and the researchers at the School of Physical Sci- ences are playing vital roles in the design, construction and commissioning stage for those facilities.

The faculty members and the students of the School of Physics are the core members of those cutting-edge research programs. The opportunity to be immersed in those state-of-the-art scientific programs allows our students to learn from the most talented scientists in China and international community alike; the hands-on research training empowers our students to explore the new horizons of physics and paves the road for them to reach for more and greater scientific achievements for mankind.

Some notable research achievements include the breakthrough in iron-based superconductors performance records, the discovery of a new particle with at least four quarks, the discovery of neutrino oscillation, and the observation of Weyl nodes in TaAs . The Daya Bay Reactor Neutrino Experiment research team won the Fundamen- tal Physics Breakthrough Prize in 2016.

Achieve the highest t c up to 55 K in iron- based superconductor.

In 2015, Prof. Zhao Zhongxian was awarded the Matthias prize for the discovery of RE(O,F) and (RE)O1-xFeAs (RE= rare earth) with a Tc up to 55 K, demonstrating the limit of Tc in bulk Fe-based superconductors. A new type of neutrino oscillation was observed in Daya Bay Reactor neutrino experiment in 2012.

The Daya Bay neutrino experiment led by Prof. Wang Yifang observed a new type of neutrino oscillation in 2012. The copious data revealed for the first time the strong signal of an effect that the scientists were searching for, the so-called “mixing angle” named theta one-three (written θ 13 ), which the researchers measured with unmatched precision. Theta one-three, the last mixing angle to be precisely measured, expresses how electron neutrinos and their antineutrino counterparts mix and change into the other flavors. The Daya Bay collaboration’s first results indicate that sin 2 2 θ 13 is equal to 0.092 plus or minus 0.017. The collaboration hence won various prestigious awards in physics including the Breakthrough Prize in Fundamental Physics in 2016.

Selected Research Highlight: The Prediction and Observation of Weyl nodes in TaAs 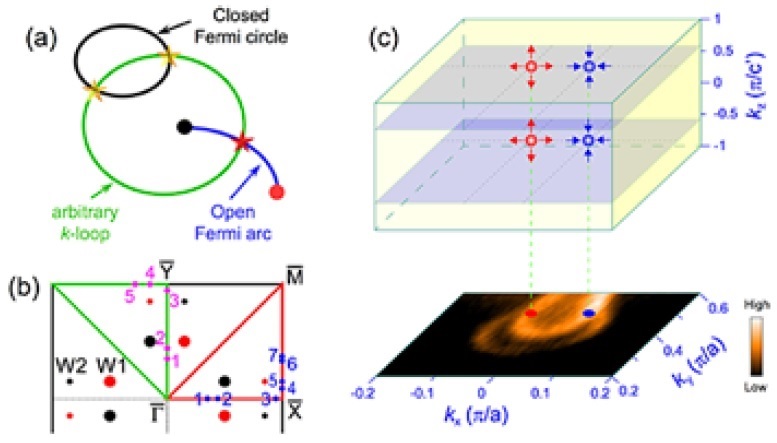 shows Schematic of a closed Fermi surface circle and an open Fermi arccrossing an arbitrary k-loop in the two-dimensional case.

In 2014, Prof. Weng Hongming, Prof. Dai Xi, and Prof. Fang Zhong and their collaborators predicted that the non-magnetic and non-centrosymmetric transition-metal monoarsenide TaAs family compounds are Weyl semi-metals (WSMs). This prediction was soon confirmed by several experiments worldwide. The existence of Weyl nodes in WSMs leads to the observation of a surfaceFermi arc, one of the fingerprint phenomena of WSMs. These achievements provided undisputable experimental evidence for the existence of Weyl fermionic quasiparticles in TaAs. The results were selected by the American Physical Society (APS) as one of the eight highlights of 2015, and was also selected as the Physics World Top 10 Breakthrough 2015 by Institute of Physics. 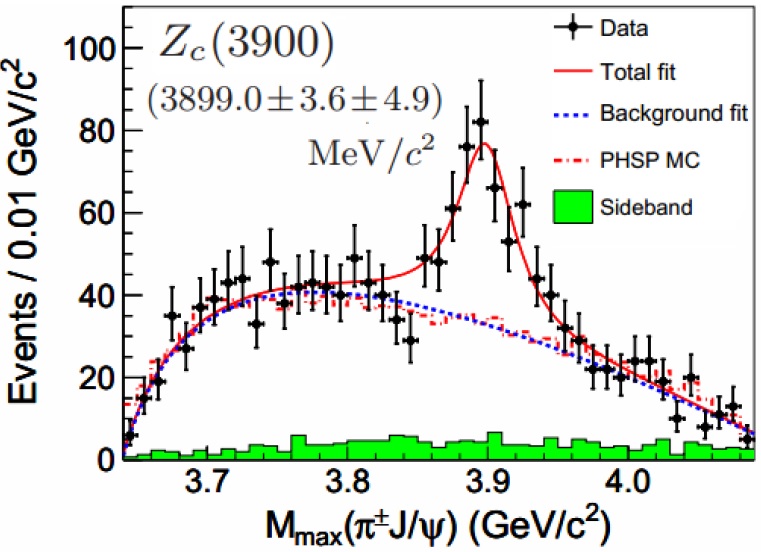 Ordinary matter contains two or three quarks. In 2013 and 2014, at the BEPCII/BESIII Experiment, Prof. Yuan Changzheng, Prof. Zheng Yangheng, Prof. Lv Xiao-rui and their teams observed a series of new particles, named Zc, which appear to contain four quarks, a pair
of charm-anti-charm quarks, and a pair of lighter quarks formed an electric charge. It is believed to be the four-quark matter (an exotic hadron) that scientists have been looking for. It might provide significant information to understand the internal structure of the Zc particles, and to understand the fundamental structure of matter in the universe. The results were selected by “Physics” magazine as the first highlight of 2013.