A new particle Zc (4025) observed by BESIII experiment in China

On April 2, in the latest issue of Physical Review Letters (PRL), the BESIII Experiment at the Beijing Electron Positron Collider in China released a newly found particle – charged charmonium-like resonance Zc (4025), which was observed through the final states of an excited charm meson and an excited anti-charm meson. The data analysis was performed by a group of scientists from the University of the Chinese Academy of Sciences. This article was selected to be the Editors’ suggestion by PRL. 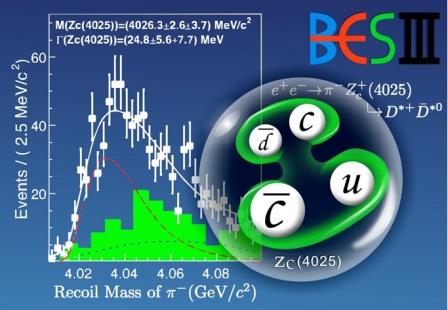 Similar to Zc (3900) observed in last March, Zc(4025) contains at least four quarks, a pair of charm-anti-charm quarks, and a pair of lighter quarks formed an electric charge. It believed to be the four-quark matter (an exotic hadron) that scientists have been looking for. It might provide significant information to understand the internal structure of the Zc particles, and to understand the fundamental structure of matter in the universe, according to the scientists.

Quarks are the fundamental building blocks of matters in our nature. They combine to form protons, neutrons and hundreds of other particles called hadrons. Until recently hadrons were believed to have only two possible structures. Baryons, including the proton and neutron, are made of three quarks. Mesons, like the pion and kaon, consist of a quark and an antiquark. All mesons and most baryons are highly unstable, living much less than a millionth of a second after production. Zc particles appeared to contain at least four quarks. Though other explanations for the nature of Zc are possible, the “four-quark matter” interpretation may be gaining traction.