The UCAS group lead by Prof. Yangheng Zheng and Prof. Xiao-Rui Lyu, as a member of the BESIII collaboration, recently carried out direct measurements on the hadronic decay rates of the Lc baryon based on the threshold production in the BESIII experiment at BEPCII in Beijing. The work was published as a letter in issue 5, Vol. 116 in Physical Review Letters in 2016. 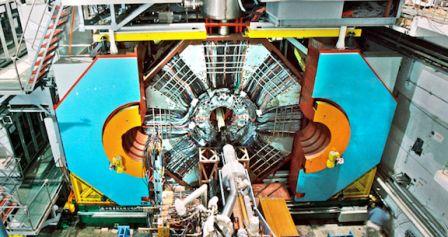 The charmed baryon Lc+ was first observed in 1979 by the Mark II experiment. Its decays to hadrons proceed only through the weak interaction. Hence, the Lc+ decay branching fractions are key probes to understand the weak interactions inside a baryon. Especially precise measurement of the Lc+ decays will provide important information on the final state strong interaction in the charm sector, thereby improving our understanding of Quantum Chromodynamics in the non-perturbative energy region. In addition, most excited Lc− and Σc−type baryons and b-flavored baryons eventually decay into a Lc+, and studies of these baryons are directly connected to understanding the ground state Lc+.

However, measurements of the ground state Lc+ were mostly performed by experiments more than 20 years ago. Most decay rates of the Lc+ are measured relative to the decay mode Lc+ → pK−π+. There are no completely model-independent measurements of the absolute branching fraction for this decay mode.

In 2014, the Beijing Spectrometer (BESIII) experiment accumulated a data sample of e+e− annihilations with an integrated luminosity of 567pb−1 at the center-of-mass energy of 4.599 GeV, about 26 MeV above the Lc+Lc− pair mass threshold. At this energy, no additional hadrons accompanying the Lc+Lc− are produced. The UCAS group measures hadronic branching fractions at the Lc+Lc− threshold using a double tagging technique which relies on fully reconstructed Lc+Lc− decays. This technique obviates the need for knowledge of the luminosity or the Lc+Lc− production cross section. To improve precision, BESIII combines twelve Cabibbo-favored decay channels and implements a global least-squares fit by considering their correlations. The branching fraction of the Lc+ → pK−π+ is determined to be (5.84±0.27±0.23)%. This first measurement of the absolute branching fraction of Lc+→pK−π+ at the threshold is made after 30 years since the discovery of the Lc+. It has the advantage of optimal understanding of model uncertainty. In addition, measurements of the other eleven Cabibbo-favored hadronic decay modes are significantly improved.

In 2015, the UCAS group also measured the absolute branching fraction of the semi-leptonic decay Lc+→Λe+ve, using a missing-neutrino technique based on this data set. A future larger Lc+ threshold sample will help to improve our understandings on the Lc+ properties.