In a recent paper published in Science Advances (http://advances.sciencemag.org/content/4/3/eaap9096), Professor Wu Zhou and Associate Professor Yu-Yang Zhang from the School of Physical Sciences and CAS Center for Excellence in Topological Quantum Computation in University of Chinese Academy of Science (UCAS) report a surprising method for growing two-dimensional quantum well superlattices only a few atoms thick by making use of the mismatched lateral interface between two semiconducting monolayer materials with different lattice constants.

A superlattice is an artificial crystal structure consisting of two or more materials that are grown alternately on top of each other in a periodic fashion. Typically, the thickness of each material, or the width of the quantum wells, in the stacking direction of the superlattice is controlled within the range of several nanometers, such that the quantum confinement effect becomes significant allowing intriguing properties to emerge in these artificial structures. Semiconductor superlattices have thus found important applications in electronics and optoelectronic devices, such as quantum cascade lasers, infrared photodetectors, high electron mobility transistors, high efficiency thermoelectrics, and solar cells. 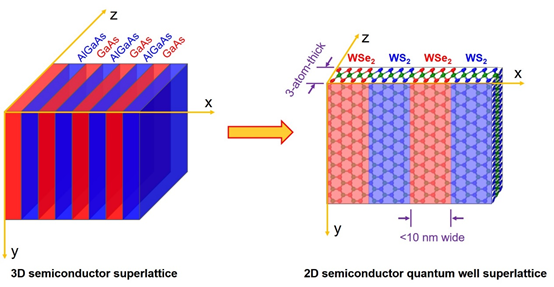 The results reported by Zhou and coauthors came as a surprise in the study of lateral heterostructures of monolayer tungsten disulfide (WS2) and tungsten diselenide (WSe2), which have about a 4% difference in lattice constants. With the help of atomic resolution imaging in low-voltage aberration-corrected scanning transmission electron microscopy (STEM), the authors observed a novel quantum well superlattice structure with a uniform width of 1.2 nanometers and periodicity of about 10 nanometers (see the figures below), which had grown from the mismatched hetero-interface between WS2 and WSe2. A combined effort of electron microscopy, led by Wu Zhou, and theory, led by Yu-Yang Zhang, finally revealed the mystery.

Atomic resolution images of a novel two-dimensional WS2|WSe2 quantum well superlattices with the corresponding structural model on the right.

It turns out that the inherent lattice mismatch between the two semiconductor monolayers, WS2 and WSe2, generates periodic arrays of misfit dislocations (a type of structural defect consisting of connected pairs of 5- and 7-atom rings) in order to release the interfacial strain. These misfit dislocations are highly reactive during the growth of the heterostructure, and gradually climb into the WSe2 lattice with the insertion of tungsten (W) and sulfur (S) atoms. In addition, the local compressive strain field around the dislocations makes the surrounding selenium (Se) atoms prone to be replaced by smaller sulfur atoms, resulting in an array of WS2 quantum wells 1.2 nanometers wide along the trace of the dislocation climb within the WSe2 lattice.

Dislocations, which are considered structural defects, are usually undesired in semiconducting materials. However, in this particular case, their motion drives the growth of this novel two-dimensional WS2|WSe2 quantum well superlattice. This new misfit-dislocation-driven growth mechanism is expected to be universally applicable  to different combinations of two-dimensional materials with lattice mismatch, paving the way to a wide range of two-dimensional quantum-well superlattices with interesting electronic and optical properties.

This study was carried out in close collaboration with Professor Sokrates T. Pantelides of Vanderbilt University, who is also a Distinguished Visiting Professor at UCAS, Professor Kian Ping Loh of National University of Singapore, Professor Zheng Liu from Nanyang Technological University in Singapore, and Dr. Matthew Chisholm of Oak Ridge National Laboratory. The research was supported in part by the National Natural Science Foundation of China and the Chinese Academy of Sciences.