T-carbon, a new allotrope of carbon that was predicted and developed by scientists led by Prof. Gang Su (Associate Director of Kavli ITS, VP of UCAS), has been successfully synthesized. The finding was published on Nature·Communication in 2017.

Scientists have held great interest in exploring new carbon structures since the 1980s. The most well-known of this research is Fullerence (synthesized in 1985, Nobel Prize in Chemistry, 1996) and Graphene (fabricated in 2004, Nobel Prize in Physics, 2010). These discoveries in carbon structures not only has great impact on chemistry, physics, material science and information sciences, etc. but also facilitated numerous functional components and products. T-carbon was named to a new three-dimensional cubic crystal structure, in which each carbon atom in a cubic diamond is replaced by tetrahedron structures of four atoms in 2011. T-carbon is a direct gap semiconductor with the same spacegroup but just half the density of diamond. Prof. Su also discovered that T-carbon is easier to be formed under negative pressure environment and could possibly be found in cosmic dust and extrasolar planets. 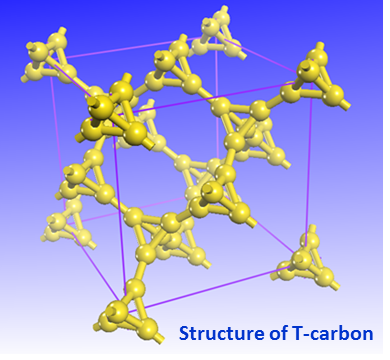 Carbon can bind with other chemical elements and form various biomolecules such as DNA and protein, etc., which make it one of the basic elements on earth, explained by Prof. Gang Su. He further explained that T-carbon material is of high hardness and great internal space, with a hydrogen storage capacity of over 7.7% in weight. T-carbon is expected to have a wide application in a range of fields including photocatalysis, absorption, energy storage and space material research.

In 2017, a joint research team of Southwest Jiaotong University and Nanyang Technological University, Singapore, have successfully achieved the chemical bond transformation from sp2 to sp3, and announced the synthesization of T-carbon.