Significant progress on intrinsically patterned two-dimensional materials and their functionalization

Graphene, a monolayer of carbon atoms with honeycomb structure, has been widely investigated since the exfoliation in 2004. Graphene possesses plenty of unique and extraordinary properties, such as high charge-carrier mobility, high optical transparency, and room temperature quantum hall effect. These and other properties make graphene suitable for applications in electronics, optics, magnetics, biology, medicine, catalysis, energy storage, sensors, etc. Thus, Graphene is recognized as a revolutionary material in this century. The great success of graphene has inspired the exploration of novel two-dimensional (2D) atomic crystals beyond graphene.

Typically, application of 2D atomic crystals requires functionalization and patterning, for example, semiconductor films need to be doped as n-type or p-type in a lithographically-patterned way to construct pn junctions (light-emitting diodes, junction lasers, resistors) and transistor structures. Functionalization of 2D atomic crystals can be done in a variety of ways, e.g., by doping with impurities or molecules, either within the 2D lattices or adsorbed on the exposed surfaces.

Recently, Prof. Hong-Jun Gao’s group reported the growth of a family of 2D atomic crystals that are intrinsically patterned and demonstrated that these materials can serve as templates for selective self-assembly of molecules or nanoclusters, as well as for the functionalization of the same substrate with two different species. They reported two prototypes of patterned 2D atomic crystals: 1H/1T monolayer PtSe2 tiling pattern and monolayer CuSe with periodic nanopores. In both patterned materials, adsorption of different species at preferred pattern components has been achieved, illustrating the potential for selective/dual functionalization.

Monolayer PtSe2 has two conformations: octahedral (1T) and triangular (1H). In 2015, Gao’s group successfully fabricated high-quality, single-crystalline, monolayer PtSe2 (1T) films by a single step of direct selenization of a Pt(111) substrate. [Nano Lett. 15, 4013 (2015)]. Based on this work, they annealed the homogeneous 1T sample to 400 ℃, which leads to the loss of some selenium, leaving vacancies in the film. After the vacancies’ rearrangement, the 1H/1T patterned PtSe2 form (Figure 1 and Figure 2). In addition, by adding selenium to the 1H/1T-PtSe2 film, they realized the reverse transformation, from 1H/1T-PtSe2 to 1T-PtSe2. The highly ordered triangular tiling patterns constructed by 1H and 1T phases of a monolayer PtSe2 make it a suitable template for selective adsorption of different species. Figure 2h and 2i shows that pentacene molecules adsorb selectively on 1H triangles, allowing the formation of a periodic array of molecules.

In addition to 1H/1T patterned PtSe2, Gao’s group fabricated an intrinsically patterned form of monolayer CuSe by direct selenization of Cu(111) substrate for the first time. Monolayer CuSe film with a honeycomb lattice is a new type of two-component 2D atomic crystal. To relieve the strain coming from lattice-mismatch between CuSe layer and Cu(111) substrate, monolayer CuSe has periodic arrays of identical triangular nanopores. The nanopores form a hexagonal lattice as indicated by the green hexagonal lattice matrix with a periodicity of ∼3 nm. By a combination of density functional theory (DFT) calculations and scanning tunneling microscopy (STM), they demonstrated that the nanopores are formed by removal of 13 atoms on CuSe lattice (three complete six-member rings) (Figure 3). To functionalize the patterned CuSe monolayer with nanopores, Fe atoms and FePc molecules are deposited on a CuSe monolayer. They found that Fe atoms form W-shape clusters in the nanopores with a formula of Fe13Se7 and FePc molecules are monodispersed and adsorbed only on CuSe terraces (Figure 4).

Adsorption of different species at specific pattern sites has been achieved, demonstrating that these materials can serve as templates for selective self-assembly of molecules or nanoclusters, as well as for the functionalization of the same substrate with two different species. In addition, two intrinsically patterned monolayers (1H/1T-PtSe2 and CuSe) are stable in ambient conditions, which make these patterned monolayers suitable for applications involving ambient conditions.

This work entitled “Intrinsically patterned two-dimensional materials for selective adsorption of molecules and nanoclusters” was published on Nature Material with a News and Views entitled “CHALCOGENIDE-BASED 2D MATERIALS Intrinsic nanoscale patterning” in the same issue. “A method to realize regular patterns with nanometre precision during the synthesis of PtSe2 and CuSe monolayers has been developed”, said Prof. Joseph W. Lyding from University of Illinois at Urbana-Champaign. “The generalization to a very broad class of chalcogenide-based 2D materials will create further opportunities for fabricating nanoscale devices and chemical processing systems using the intrinsic nanoscale patterning processes demonstrated by Gao and colleagues.”

The work was mainly supported by the Ministry of Science and Technology of China, the National Science Foundation and Chinese Academy of Science. 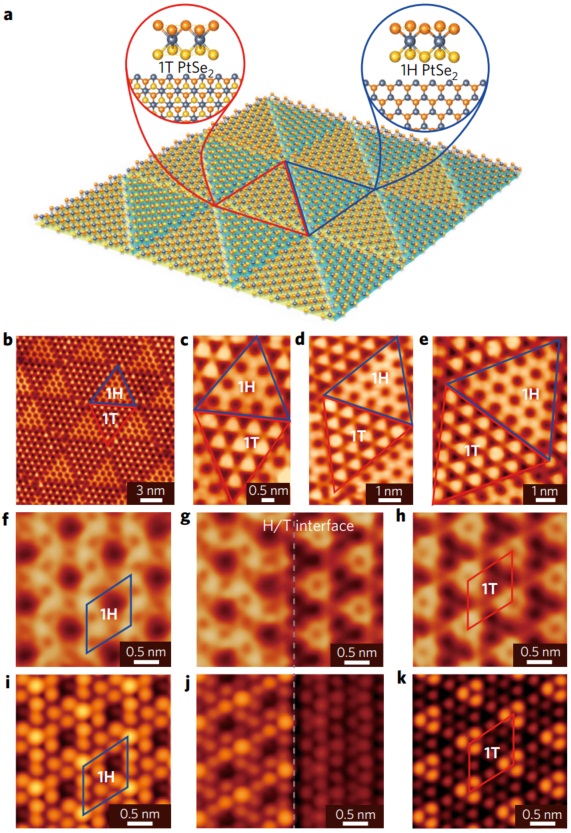 Figure 1 | 1H/1T tiling pattern in monolayer PtSe2. a, Schematic illustration of the triangular tiling pattern formed by alternating 1H- and 1T-PtSe2 areas, which are colored blue and yellow, respectively. Two views of atomic models for the two configurations are shown in the respective inserts. The top-layer Se atoms, Pt atoms and the bottom-layer Se atoms are colored orange, blue and yellow, respectively. b, STM image of the 1H/1T patterned structure in monolayer PtSe2. Vs = -1.6 V, It = 0.1 nA. c-e, STM images of 1H- and 1T-PtSe2 domains of different sizes. Vs = -1.6 V, It = 0.5 nA. f-h, High-resolution STM images of 1H-PtSe2 (f), 1H/1T interface (g), and 1T-PtSe2 (h). The unit cells of the 1H and 1T domains are marked by blue and red diamonds, respectively. Vs = -1.0 V, It = 0.8 nA. i-k, STM simulations of a 1H-PtSe2 domain (i), the 1H/1T interface (j), and a 1T-PtSe2 domain (k), respectively. 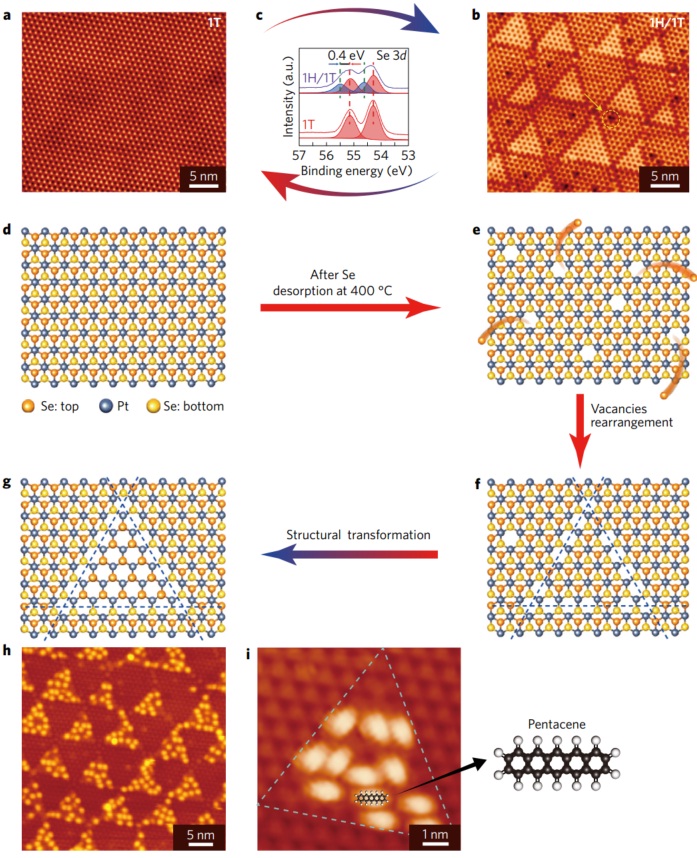 Figure 2 | Reversible transition and selective adsorption of 1H/1T tiling pattern. a and b, Typical STM images of pure 1T-PtSe2 (a) and 1H/1T patterned PtSe2 (b). The 1H/1T tiling structure can be obtained from a pure 1T structure by annealing the sample to 400°C. The reverse process (from 1H/1T tiling to pure 1T structure) can be realized by adding Se and annealing at 270°C. Vs = -1.6 V, It = 0.1 nA. c, The XPS spectra of Se 3d electrons for the entire reversible structural transformation process. The red and purple peaks originate from Se 3d electrons in 1T- and 1H-PtSe2 films with a 0.4-eV shift, respectively. d-g, Schematic illustration of the structural transformation from pure 1T-PtSe2 to 1H/1T patterned PtSe2. The formation of 1H-PtSe2 domains is a result of the collective evolution of Se vacancies. h, An STM image of pentacene molecules selectively adsorbed on the 1H-PtSe2 domains of a 1H/1T patterned PtSe2 film, forming well-ordered triangular clusters. Vs = -1.6 V, It = 0.5 nA. i, High-resolution STM image of pentacene molecules selectively adsorbed on one 1H-PtSe2 domain. A schematic of a pentacene molecule is shown on the right. Vs = -1.0 V, I = 0.8 nA. 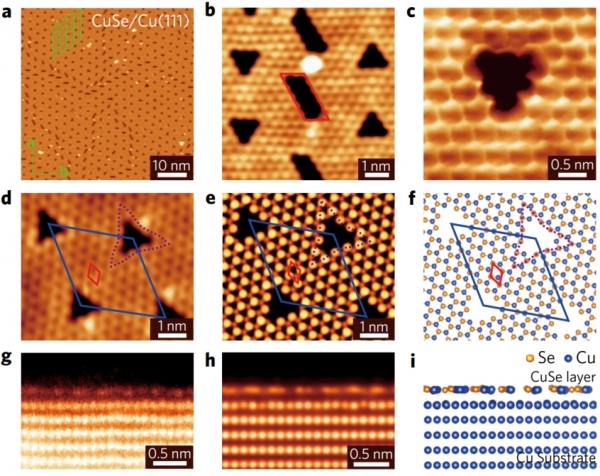 Figure 3 | Patterned CuSe monolayer with periodic nanopores. a, A large-scale STM image of patterned CuSe monolayer. The green lattice presents the 3-nm periodicity of the nanopores. Vs = -1.5 V, It = 0.1 nA. b, A high-resolution STM image of a domain boundary region. The boundary consists of parallelogram-shaped nanopores as indicated by the red parallelogram. Vs = -1.0 V, It = 0.3 nA. c, A high-resolution STM image of a single nanopore. Honeycomb lattice of CuSe and the zigzag edges of the nanopore are clearly resolved. Vs = -0.01 V, It = 7.0 nA. d-f An atomic-resolution STM image (d), simulated STM image (e), and theoretical model (f) of CuSe monolayer on Cu(111) with periodic nanopores, respectively. The images show the detailed structure of nanopores. Vs = -1.0 V, It = 0.4 nA. In f, Cu substrate is hidden for visualization purposes. g-i, Cross-section STEM image (g), simulated cross-section STEM image (h), and side view (i) of a CuSe monolayer on a Cu(111) substrate. The STEM image confirms that the patterned CuSe is single layer. 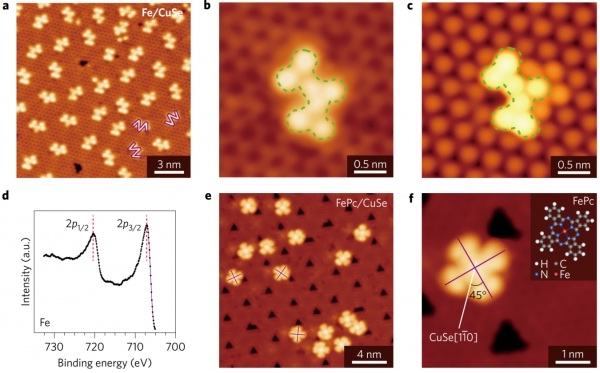 Figure 4 | Selective adsorption on patterned CuSe with periodic nanopores. a, A large-scale STM image of CuSe monolayer with W-shaped FeSe clusters. The clusters selectively adsorb in the nanopores of CuSe monolayer. Vs = -0.1 V, It = 1.5 nA. b, A high-resolution STM image of the W-shaped cluster. The image shows that the W-shaped cluster contains seven protrusions. Vs = -0.1 V, It = 1.5 nA. c, A simulated STM image of an Fe13Se7 cluster in the nanopores. The green contour line and the seven protrusions perfectly match those in (b). d, XPS data showing the Fe 2p3/2 and Fe 2p1/2 core levels. e, A large-scale STM image of FePc molecules on CuSe. The FePc molecules selectively adsorb on CuSe terraces with preferential orientations as discussed in the text. Vs = -1.1 V, It = 0.1 nA. f, High-resolution STM image of an FePc molecule on CuSe. Atomic structure of the FePc molecule is shown in inset. Vs = -1.1 V, It = 1.5 nA.